A few days ago on May 17, the so-called "International Day Against Homophobia, Transphobia, and Biphobia", Tako van Popta, a local Canadian Reformed Member of Parliament (MP), made a public Facebook post affirming that he was "standing with" Canadian LGBTQ2 (LesbianGayBisexualTransgenderQueer...) communities. 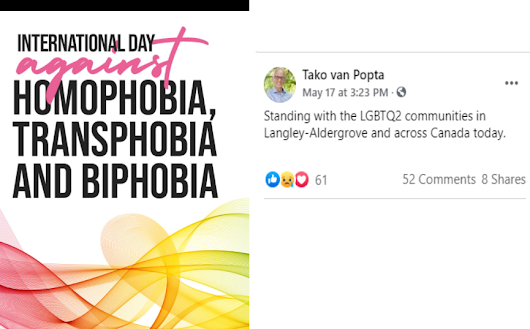 Technically, a "phobia" is a strong irrational fear of something. In our society, however, as any politician knows, the above three "phobias" are strictly derogatory slurs, applied to anyone who believes that homosexuality, transgenderism, or bisexuality are morally wrong. For example, the intent of the label "homophobic" is to write off any opposition to homosexuality as irrational bigotry that deserves no hearing. Thus any moral debate is short-circuited.
Hence, for  MP van Popta to publicly "stand with" LGBTQ2 against homophobia is to publicly stand against the Biblical condemnation of homosexual acts as sin (cf. Romans1, 1 Cor.6). No doubt that is not what he privately believes. Perhaps he merely wanted to show compassion with those struggling with such sins. However, in spite of numerous critical comments against his Facebook post, Tako has not publicly clarified his position.
A Disturbing Pattern
Unfortunately, this is not the first time that Tako van Popta failed to publicly defend Biblical norms. Before the last election (October 2019), he didn't respond to requests from the pro-family Campaign Life Coalition as to where he stood on issues such as abortion. 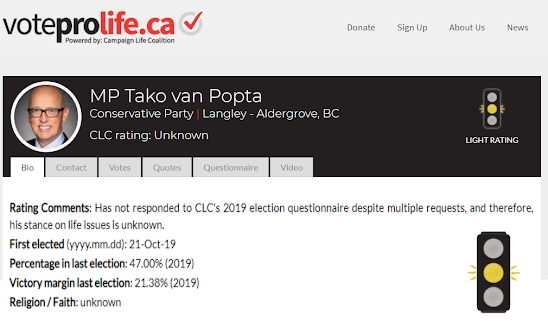 Tako van Popta belongs to the Conservative Party of Canada (CPC). In the 2020 CPC Leadership race, MP van Popta publicly endorsed the pro-abortion, pro-LGBT Erin O'Toole (who ended up winning) rather than any of the pro-life candidates.
On the positive side, he did vote against Bill C-7, which extended the practice of euthanasia.
Note that MP van Popta's religion/faith is listed as "unknown". Indeed, in all his parliamentary speeches, Tako van Popta never identifies as a Christian, never mentions God or the Bible. Apparently, MP van Popta prefers to fly his Christianity under the political radar.
Tamara Jansen, another Canadian Reformed MP, in the neighbouring riding, also from the CPC party, scores much better on these matters. 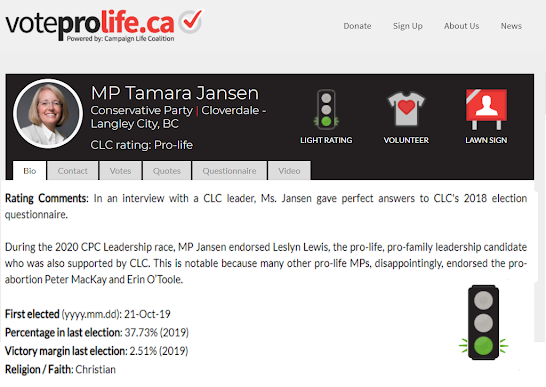 She was openly pro-life, endorsed a socially conservative CPC leadership candidate, and identified as Christian.
A Dismal Response to Bill C-6
Currently, the LGBT issue is one of the greatest challenges facing our Christian church, as the Canadian government is seeking to advance LGBT ideology by means of Bill C-6.
Bill C-6 will ban "conversion therapy", defined as any “practice, treatment or service designed to change a person’s sexual orientation to heterosexual or gender identity to cisgender, or to repress or reduce non-heterosexual attraction or sexual behaviour.” ["cisgender" means accepting your natural biological gender, as opposed to trying to change to the opposite sex]
This bill would make it a criminal offense to help an LGBT person convert to a Biblical lifestyle. Note that Bill C-6 bans only conversion therapy from LGBT to normal, but not from normal to LGBT. As such, it is a blatant promotion of LGBT ideology against Christian values.
On Oct.28 2020 Bill C-6 passed its second reading (approving it on principle and sending it to a committee to work out the details). Disappointingly, only 7 brave MP's voted against Bill C-6. Astoundingly, Tako van Popta voted for Bill C-6 (!!), whereas Tamara Jansen abstained from voting.
In the near future, Bill C-6 will be voted on for final approval. So far, in parliamentary debate on Bill C-6, MP van Popta has raised no objections at all. [He didn't answer my email urging him to defend our Christian freedoms by speaking against Bill C-6.] MP Jansen has raised some practical issues but has voiced no principial concerns.
Actually, in debating Bill C-6, theological arguments have been advanced in Parliament - but only by those MP's promoting the LGBT cause. For example, on April 16, 2021, gay Liberal MP Rob Oliphant, a United Church minister, argued that God made LGBT people as they are, hence being LGBT cannot be wrong. He quoted from the Bible, "what does the Lord require of you but to do justice, and to love kindness, and to walk humbly with your God” (Micah 6:8).
The only MP who challenged this shameless abuse of the Bible was Tamara Jansen. She cited, "You hypocrites! You’re like whitewashed tombs, which look beautiful on the outside, but on the inside are full of the bones of the dead and everything unclean" (Matt.23:27). [This was an unfortunate choice of text; a much more suitable text would have been, for example, 1 Cor.6:9-11.]
The next day, after time for sober reflection, she meekly apologized for any offense caused by her quote, foregoing an excellent opportunity to enlighten parliament as what the Bible really says about the sinful LGBT lifestyle.
Well, at least MP Jansen spoke up, unlike MP van Popta.
Canadian Reformed Political Involvement
The Canadian Reformed community has long been involved in politics. It formed the Association for Reformed Political Action (ARPA), which has been very effective in writing Reformed position papers on many political issues, such as Bill C-6, making court interventions and encouraging political action.
As to practical politics, Canadian Reformed community was instrumental in founding the Christian Heritage Party in 1987. Its first leader, Ed van Woudenberg, was Canadian Reformed. After some initial enthusiasm, however, the CHP never really took off. Given the Canadian political system, it was thought that the CHP could never win many seats, if any, and thus would never form the government. A vote for the CHP, many felt, was a wasted vote, having no real impact. A self-fulfilling prophesy, since many Christians thus voted other than CHP, so that the CHP never won any seats.
A new strategy was embraced: work within the Conservative Party, deemed the lesser of the political evils capable of winning an election. Note well that the CPC constitution is entirely humanistic, making no mention of God or any Biblical principles. Further, CPC policy dictates that no conservative government will support any anti-abortion legislation. In 2016 the CPC dropped its earlier opposition to same-sex marriage.
Nevertheless, many Canadian Reformed members pragmatically joined the CPC, hoping to bring change. Although they have as yet failed to alter any major CPC policies, they did become a major force in several CPC Electoral District Associations. This resulted in the recent (2019) election of two local Canadian Reformed MPs.
At last, it seemed, we had a Reformed voice in parliament.
But, alas, that voice has uttered disappointingly little in the way of explicit Reformed political witness. ARPA's insightful Reformed analyses, such as its ideological concerns about Bill C-6, have not been well championed by our Reformed MP's.
One factor is that the CPC leadership is greatly embarrassed by social conservatives within the CPC, even though it needs their votes. It may tolerate a few anti-abortion MPs but much less so any dissent from LGBT ideology. Hence, speaking Biblical truth in Ottawa may well come at a price. Witness, for example, the recent expulsion of the vocal social conservative MP Derek Sloan from the CPC.
One wonders, if the CPC ultimately suppresses Reformed views, are its Canadian Reformed supporters not being played for "useful idiots"? Is the Christian Heritage Party perhaps the better option after all?
I realize that it is not easy to be a Christian in parliament.  Many pressures and challenges make compromise tempting.  I thus want to encourage our MP's Tako van Popta and Tamara Jansen to stand up boldly and clearly for their Christian values and principles - whatever the political cost. Particularly in the next few weeks, when Bill C-6 comes up for final debate.
*****