The Flood and Tidal Waves

Over at Triablogue Steve Hays has posted an interesting hypothesis regarding the Genesis Flood. He writes:


A staple objection to the global flood interpretation is that it poses a double whammy: where did all the extra water come from, and where did it go?

...Suppose God gradually made the moon pass closer to the earth. Not only would that produce higher tides, but based on the inverse square law, it could generate supertides. And if, after that peaked, God made the moon recess, that would lower the tides. A single mechanism could account for both rising and lowering sea levels. You'd have the same amount of water throughout, but its distribution would vary depending on which part of the earth was facing the moon at any given time.

In his post, and the comments, various objections to this theory are addressed.

One major problem, which Hays does not consider, is that a reduction in the Earth-Moon distance would reduce also the length of the lunar month.

The notion of the Moon causing giant tidal waves has been examined in a brief article in the Journal of Physics. The authors, using a simplistic model, present the following graph: 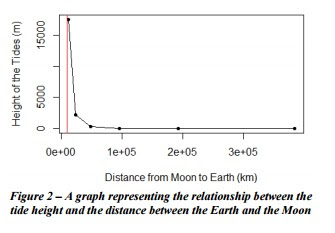 
...realistically there are many factors that would contribute to the height of the tides such as; the coastline and the nearby continental shelf. The results we have are an extreme version of what would happen. If the Moon were brought to these close distances the planet, we could expect global floods due to the tidal waves reaching height of several kilometres, this would dramatically affect the coastlines. Shortening of the Moon’s distance doesn’t just affect the tides on Earth, the planet as a whole will experience changes such as; its rotation and the shape, this can be further investigated.

It is evident from the above graph that, for significant tidal waves, the Earth-Moon distance (currently about 384,000 km) would have to decrease to less than 40,000 km, or about 1/10 its present distance.

According to Kepler's Third Law, the period T of the Moon's orbit is related to the Earth-Moon distance r by the equation

Reducing r by a factor of 10 thus reduces T by a factor of about 32. T is the sidereal period, the time for the Moon to return to its same position relative to the stars. The current T is 27.3 days. The reduced T would thus be less than 1 day. The lunar period concerning the phases of the Moon is determined by the motion of the Moon relative to the Sun. This is called the synodic period (the time between two full moons), which is currently about 29.5 days.

Was the month shorter during the Flood? According to the Bible, the Flood started on day 17 of month 2 (Gen.7:11), and the ark came to rest on Ararat on day 17 of month 7, 150 days later (Gen.8:3-4). Dividing 5 months into 150 days yields a month of 30 days. This indicates that the length of the month did not change significantly during the Flood. In that case, the Earth-Moon distance could not have changed much either, which rules out Hays' suggestion.

As to where the extra water came from, the Bible itself refers to its sources: "all the fountains of the deep burst forth, and the windows of the heavens were opened." (Gen.7:11). The atmosphere would not have provided sufficient rain for a massive global Flood. However, even today there seem to be massive amounts of water inside the Earth. An article in the New Scientist (2014) reports:


A reservoir of water three times the volume of all the oceans has been discovered deep beneath the Earth’s surface. The finding could help explain where Earth’s seas came from.

Where did the Flood water go? Was it swallowed up back into the earth? or did the Flood result in an altered topography, raising mountains and deepening ocean floors to accommodate the extra water? Various such scenarios have been proposed. The most popular of these is the Catastrophic Plate Tectonics (CPT) model (see Jonathan Sarfati, The Genesis Account (2015), pp.531-536 for a discussion of its strengths and problems).

A note of caution. D.C. Allen in his book The Legend of Noah (1963) describes how 17th century theologians addressed scientific questions regarding the Flood. Most Roman Catholic theologians met scientific difficulties by declaring that the impossibility of explaining the mechanics of the Flood clearly showed that it was a miracle. But many protestants, anxious to prove that all of the Bible accorded with human reason, tried to work out precise scientific solutions. Their failure to explain the details to the satisfaction of the critics eventually led to the inspired history of Noah being relegated to simply a myth.

The lesson is that we must always be careful to distinguish the Biblical givens from fallible human models that try to explain these. Our faith in the Bible should not rest on our ability to provide scientific explanations of biblical events. On the contrary, any inability of scientific models to explain biblical events merely reflects the inadequacy of human theorizing.

where did all the extra water come from, and where did it go?
https://www.youtube.com/watch?v=NEkXCYrQUAg

Hays continues to ride the fence on issues such as an old earth vs. young earth, and local flood vs. global flood. His posts are subtle. He never comes right out in defense of either position. You can't tell him he's wrong either; the result will be a visceration in the next pages of his blog; if that is he even lets your post through his screening filter. I'm not trying to be uncharitable, but Hays is no friend of the position taken by ByLogos.

I want to remind readers that my comment policy is not to publish anonymous comments, particularly those that criticize others. In line with that, I have removed a comment here. If you have valid reasons to remain incognito, please contact me directly explaining your situation. Also, it is best to concentrate on ideas rather than personalities.