Review: In the Beginning

Until recently, most Christians have taken Genesis as a reliable account of origins. Currently, however, many Reformed theologians, influenced by extra-biblical sources such as Ancient Near Eastern literature or evolutionary science, question this.

Is the widespread departure from the historic Reformed understanding of Genesis justified? The focus of this book is to listen carefully to Scripture so as to hear what God tells us about the historicity of the early chapters of Genesis. As such, its basic presupposition is to take seriously the integrity of the text of Genesis as part of God's word, which must be accepted in faith. The historical intent and meaning of Genesis must be judged by its own testimony. 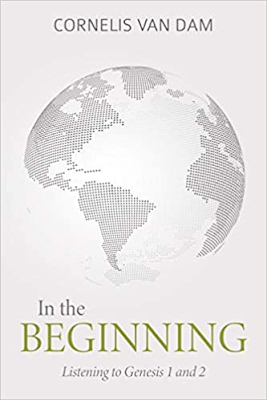 Regard Ancient Near Eastern literature, Dr. van Dam notes that, although there are some similarities with Genesis, there are also major differences. Further, the similarities are readily explained as corrupted memories of the original divine revelation about origins as found in Genesis.

What about science? General revelation via nature reveals God's glory, not scientific truth. As a means to truth, science has serious limitations, particularly concerning origins. Scripture is the primary authority, particularly regarding origins. Science should thus make use of the reliable information found in the Bible. Hence, if a scientific hypothesis clashes with Scripture, Scripture should be followed.

From the context and genre of Genesis 1 and 2, as well as Scriptural references to these, Dr. van Dam concludes that they are intended to be taken as a record of historical events.

Here is a brief overview of some of the main points he raises in reading Genesis 1-2:

● In the beginning, on Day 1, God created heaven and (an as yet unformed) earth. Grammatically, textually,  and contextually, the creation days were literal days, albeit of unusual nature since the Sun was not created until Day 4. Non-literal views, such as the Framework View (Meredith Kline) or Analogical Days (C. John Collins), are exegetically unwarranted and undermine the historicity of Genesis 1. Also, contrary to what John Walton wrongly contends, the verb "to create" (Hebrew bara) means "to bring something into being", not "to give an existing entity a function".

● The Bible reveals the existence of God's invisible, physical heaven. Beyond that, it teaches no cosmology. It certainly does not reflect the alleged Ancient Near Eastern cosmology of a flat earth, floating on water, covered by a solid vault. The Bible does not view the earth as flat; the expanse (Hebrew raqia) of Day 4 is not said to be solid but merely refers to the atmosphere and sky; the "waters above the expanse" are clouds; the "waters under the earth" are just oceans.

● The creation account leaves no room for an evolutionary origin of creatures, particularly not of Adam and Eve. Everything was created in mature form, only thousands, not billions, of years ago. The seventh day was a normal day, wherein God declared His creation to be "very good."

● What was the pre-fall world like? There were as yet no thorns or thistles, which came as a result of Adam's sin. The possibility of pre-fall animal death or predation is left open but large-scale catastrophic death, such as is reflected in the fossil record, must have happened after Adam's fall. (Gen.1:29-30 [cf. Gen.9:3], which seems to imply that man and animals were originally vegetarian, is not discussed by Dr. van Dam).

● Although Eden was a real geographic place, its Biblical description does not match any current topography. This is probably due to landscape changes caused by Noah's worldwide flood.

Throughout the book, the teachings of Genesis are discussed in relation to current science.

A proper understanding of Genesis 1-2 is essential to Christian faith, particularly given the close connection between creation and the gospel of redemption/re-creation, between the first Adam and the second Adam.

Dr. Van Dam gives an excellent defense of the traditional reading of Genesis1. He reads the text on its own terms, informed by how it is used by the rest of Scripture, letting the exegetical chips fall where they may. It is a refreshing contrast to many Reformed commentators who have been unduly influenced by Ancient Near Eastern literature or evolutionary science.

This book contains well-grounded responses to various objections raised against the traditional view. It has good critiques of contrary interpretations. There are many up-to-date references.

I find it very readable, informative, and Biblically sound. It will help Christians to read Genesis properly. It is a very worthwhile contribution to the current debate, also within Reformed churches, on origins. Hopefully, it will serve to strengthen faith in our Lord and His word, in an age of ever-increasing attacks on the Christian worldview.