In a previous post I discussed the antithesis, tracing it from Abraham Kuyper's neo-Calvinism to North America via Cornelius Van Til and his followers. Another neo-Calvinist stream from Kuyper flows from Herman Dooyeweerd (1894-1977), a Dutch philosopher who taught for many years at Kuyper's Free University in Amsterdam.

Dooyeweerd's system was called the "philosophy of the cosmonic idea" or of the "law idea", or "Reformational philosophy". A basic notion was the Biblical theme of creation-fall-redemption. A central theme was that reality was much too rich to be reduced to only one aspect. Dooyeweerd posited that nature had 15 distinct modalities or spheres (i.e., from number and space...to ethics and love), each with its own God-given laws. His sytem is quite complicated, replete with a sophisticated new vocabulary. Here is a handy diagram: 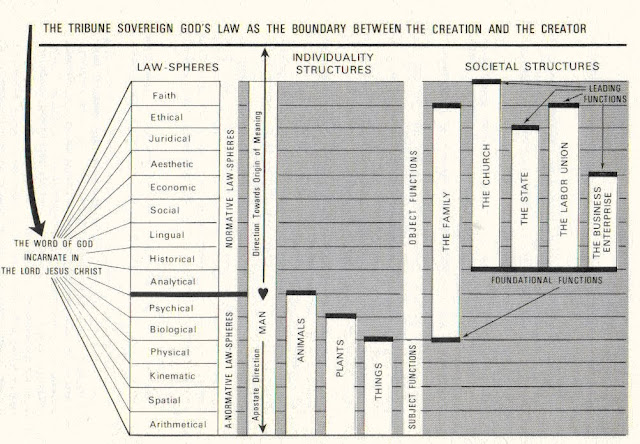 In the 1960's Dooyeweerd was extensively promoted in the Christian Reformed circle in which I lived. Dooyeweerd's daughter was a member of our local congregation; two of his grandsons were my classmates.

Dooyeweerd became quite influential in North America among Reformed scholars of Dutch background, particularly at the Canadian institutions The King's College (Edmonton), Redeemer College (Ancaster), The Institute for Christian Studies (Toronto), as well as at Trinity Christian College (Chicago) and Dordt College (Iowa).

While I appreciated that this system offered many intriguing insights into the manifold nature of reality, I had too many reservations to ever become a full-fledged member of the movement.

Reformational Philosophy and the Bible
Many of my concerns echoed those found in an old 1972 critique by John Frame (see also Frame's more recent post Dooyeweerd and the Word of God). My prime difficulty had to do with Biblical authority. More recently, Glenn Friesen has raised similar concerns in a useful paper "95 Theses on Herman Dooyeweerd", published in Philosophia Reformata, the journal founded by Dooyeweerd himself. Friesen notes that Dooyeweerd's philosophy was not based on any biblical texts. Indeed, Dooyeweerd criticized Cornelius van Til for using Scripture as a source for philosophy, for finding revealed concepts in Scripture and for urging that all human thought be subjected to divine thought.

According to Dooyeweerd, the Bible speaks in the faith modality--to our supratemporal heart--but not in a propositional way. Dooyeweerd distinguished between the Scriptures and God’s Word; he rejected the notion that the Bible was divinely inspired, word for word. For Dooyeweerd the Bible does not offer reliable knowledge in non-religious fields of learning. The laws for each modality are to be determined by examining reality, not Scripture.

Most Reformationals seem to hold similar weak views regarding Scripture. Rarely do they promote biblical inerrancy or a full-fledged biblical authority.

Reformational Philosophy and Evolution
It might seem that the presumed irreducibility of the various modalities would rule out an evolution from matter to life and the higher modalities. Particularly so since Dooyeweerd held that the entire creation fell along with humanity in the Fall; even cosmic time itself was a result of this fall.

Nevertheless, Dooyeweerd was open to the possibility of evolution. On the basis of fossil records, he asserted that plants and animals existed and died long before the appearance of man. He went so far as to consider it blasphemy (!) to conceive of the six day creation as occurring in natural scientific time-concepts (In the twilight of western thought, 1960, p.150).

Many Reformational scholars likewise accept full-blooded evolution, including universal common ancestry, as a proven fact. For example, Roy Clouser, a prominent reformational spokesman, interprets Gen.1-2 in a figurative fashion and asserts there is no biblical reason to reject evolution, not even human evolution. Clouser writes:


I conclude, therefore, that on religious grounds there is no need for a theist to reject the evidence for an old age of the universe and the earth, or the theory of a gradual diversification of living things. The acceptance or rejection of such ideas should be decided on the scientific evidence alone... A theist is as much within his intellectual rights to accept evolutionary theory while believing those processes to have been created by God as he is to believe atomic theory while holding atoms to have been created by God.

Elsewhere, Clouser follows Dooyeweerd in rejecting the idea that the Bible contains pertinent information for history or science, a notion he denigrates as "fundamentalism". His view of a Christian perspective to science seems to consist primarily of countering reductionism by "constructing systematically non-reductionist explanations." In practise, this usually amounts to little more than re-interpreting scientific theories within a Dooyeweerdian modal scheme.

When I taught at Dordt College in 1977-78 there had been a showdown between the Reformationals and creationists  a few years earlier. The Reformationals won, and most of the creationists (including Gary Parker) departed elsewhere. A recent graduate of Dordt has remarked on the infatuation of neo-Calvinists with theistic evolution, which he believes is probably the majority view in the science departments of the neo-Calvinist institutions Dordt, Trinity Christian and Redeemer (in a survey of American colleges, both Dordt and Trinity Christian indicated they were open to theistic evolution).


"The Bible needs to be known, and its authority taken seriously...Here the present generation of neocalvinists stand in marked contrast to earlier generations, who had a much more robust and straightforward notion of Scriptural authority, and a greater suspicion of their own sensibilities. I see it as one of the signal failures of neocalvinism that it has not done a better job of honouring Scripture in these respects. A deepened appreciation of the authority of Scripture is part of a keener sense of what Kuyper called "the antithesis", the spiritual warfare between Christ and Satan..."

Thus far, such voices are a small minority within the Reformational movement. Hopefully, more will come to see that a genuinely Christian worldview can be maintained only on the solid basis of the full authority of God's written Word.

Thanks so much Dr Bijl, for sharing this very interesting study of yours. Of course I give my age away when I say that we also learned about Dooyeweerd's "soevereiniteit in eigen kring" as student teachers, about the different roles of church, home and school and the reciprocal impact of the spheres decades ago...

Dr. Byl, see also my post here about HG Stoker, another great reformational philosopher of the 20th century, and his critique on Dooyeweerd:

Stoker were against both darwinian and theistic evolution.

Could you respond to some of the claims being made about the "Goldilocks" planet astronomers have discovered? What are the facts involved and what is the speculation?