The Trojan Horse in the Dutch Reformed Church:
The Cancer of Evolution and Liberalism

Nowadays, challenges within Reformed Churches to Biblical teachings are widespread. This book, just published (in Afrikaans), describes how liberal and humanistic trends, including evolution, are undermining the Dutch Reformed Church in South Africa. Here is a brief English summary, kindly provided by one of the co-editors, Henrietta Klaasing (for more information see also her blog Help, Henrietta! and the publisher). 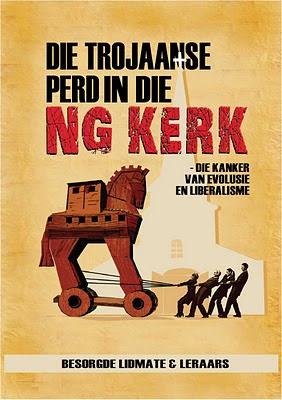 For a number of years a small, brave band of concerned members and ministers of the Dutch Reformed Church in South Africa have collectively and individually tried to turn around the liberal and humanistic trends in their church by verbal protests at church meetings and writing letters to and publishing articles in sympathetic magazines and newspapers - seemingly without success. It seems as if the liberal tide has been so great that it is humanly impossible to do anything about it.

The fact of the matter is that the Bible no longer forms the base and norm of our belief. It has become critical that present theological tendencies be brought to the attention of fellow-believers all over South Africa – especially those who still see the Bible as the Word of God.

As a last resort this group decided to write a book in which certain of the disturbing issues are addressed. In this book the enemy is portrayed as a Trojan horse that is led into an unsuspecting church.

What has been happening theologically and ecclesiastically globally, is also affecting churches in South Africa.

The attack on the authority of Scripture and the use of new methods of interpreting Scripture have led to the denying of Biblical truths like the virgin birth, the resurrection of Christ and his being the Son of God. These radical changes go to the heart of the gospel. Homosexuality is discussed as an example of how a wrong approach to Scripture can lead to wrong decisions.

New trends like the Emergent/Emerging Church and the “New Reformation” are critically examined. Alarm is raised about how these new developments will affect reformed doctrine. The lack of disciplinary measures against theologians who advance these movements while they remain in the Dutch Reformed Church is also a matter of concern.

Embracing evolution wreaks havoc on orthodox doctrine, and that is why it is extensively covered in the book.

Marriage as the Bible sees it seems to be under attack. It is expected that the new resolutions concerning marriage and cohabitation that are due to be taken at the General Synod in October 2011, will accommodate the present permissive culture and be in tune with current philosophies, while the Word of God is quite clear that sex outside of marriage is not permitted.

Positioning liberal postmodernists in powerful positions and leadership in the church and media, has led to an unequal playing-field and members should be aware of this.

The book ends on a positive note by suggesting solutions on the road ahead. An earnest request is made upon members to get involved and to take note of what is happening at theological faculties at the universities and what is published by theologians and church leaders.

May the Lord use this book to warn the Dutch Reformed Church--and other churches--and to cause it to return to the pure preaching of God's Word.

Your kind gesture is highly appreciated Doctor! I am sure we all realize how important it is that this warning go as far and wide as possible.

Thanks for this fascinating book review and the warning to Reformed churches. I'll be sure to add it to my reading list. Since you and many of the readers of your blog are members of the Canadian Reformed Church (and as I myself was for most of my life), I felt that it would be good to make a point of clarity. The CanRC has a sister church relationship with the Vrye Gereformeerde Kerke in South Africa. The VGK are faithful to the Bible and in no way falling into the "liberal and humanistic trends" of the Nederduits Gereformeerde Kerk referred to in this book, and with which the CanRC has no relationship whatsoever. I reassure your readers that your sister churches here in South Africa, if at all different in these matters than their CanRC sisters, are more "conservative".

My slightly closer observation, at least geographically, of the developments in the NGK is that there seems to be a very broad range of positions on these matters within that bond of churches. There are many individuals there that are still battling for the soul of this church, and they are worthy of our support also in prayer that this slide may be reversed.

It should also be noted that one positive influence there in the NGK is coming from within our comparatively tiny federation as your sister churches in the VGK through the "Reformed Preaching Library" run by Rev. Jopie Van Der Linden who provides solidly reformed and Biblical preaching material to thousands of ministers and lay pastors in South Africa and across the continent.

Thanks for your comments and clarification.

As I understand it,the main Reformed churches in South Africa are the following:

1. The Dutch Reformed Church (DRC or NGK in Afrikaans) is by far the largest Reformed church in SA (1,200,000 members). The book reviewed concerns mainly developments in this church.

3. The Reformed Churches of South Africa (RCSA or GKSA), the “Doppers”(90,000 members).
Broke away from the DRC in 1859, instituted Potchefstroom University. I presume this denomination has in general been more biblically sound than the previous two. However, recently it has allowed for women deacons and has made ties with the Christian Reformed Church in North America.

1. See here my articles on the GKSA's problematic decisions on women in office:

Keep your eyes on Jesus! He is in controll and always have been. The church in whatever form is part of His plan for the world. All of this only brings confusion if you don't focus on the cross.

Hi there Dr. Byl. Your summary of the main branches of the Reformed churches in South Africa is fairly accurate. There are a few other "splinter" groups, but all of those I've become aware of are very closely related to one of the branches above. It is a fascinating bit of church history all tied up with South Africa's complex political past. I've enjoyed learning more while I'm here but proceed with caution as this is often very sensitive territory.

Your assumptions regarding the doctrinal soundness and faithfulness of the GKSA vs NGK to a full and more literal reading of the Bible, as would be comfortable to a typical member of the CanRC, are perhaps a bit overstated. In my congregation we have a number of people who grew up in the NGK or GKSA (1&3 in your summary), so I always find it interesting to get their perspectives. The best comparison I can make to the Canadian context is that both of these denominations are beginning to experience what you could see with the CRCNA in Canada the past number of years. The difference from one congregation to another is becoming so great that it becomes problematic to make these generalizations on Biblical faithfulness that may previously have been easier to defend. So, although historically I could agree with your statement, those lines are becoming very blurry indeed.

That all said, and in keeping with the line of commentary of the anonymous poster just before me, we should note with great thankfulness that there are still vast numbers of faithful and reformed members and ministers within these federations, and pray that their calls to stay true to what God has revealed in His Word will be heeded for the good of His church. Indeed, let's keep focused on the cross, but remember to seek our direction for how to find it from the Word which He has given as our guide and compass, the Word which does not change along with the fickle winds of contemporary humanistic culture...

Alas a much longer reply got lost in cyberspace. Now being a little too tired to recreate it, I simply say that what you have said above, Dr Byl, is more or less accurate. I would only add that the variation from one congregation to another within the NGK and GKSA as I've experienced or heard second hand from my friends in the VGK have become very great. Therefore your assessment on "Biblical faithfulness" is becoming a little problematic.

Re: the addt'l post of Anonymous above, I would add that while I agree with you in principle we need to look for our direction of where to find that cross by looking in God's Word, and therefore prevent ourselves from vulnerability to the fickle winds of contemporary humanistic culture.