1. "Is the theory at the heart of modern cosmology deeply flawed?"
This question is raised in an interesting recent article "The Inflation Debate” by Paul Steinhardt in the latest issue of Scientific American  (April, 2011, 304: 36-43).  Steinhardt, one of the original creators of the theory of cosmic inflation, now has serious doubts about its viability. The article gives a brief summary: 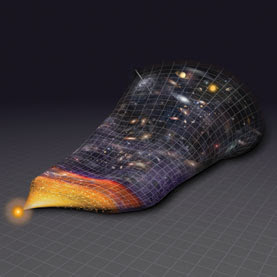 “Cosmic inflation is so widely accepted that it is often taken as established fact. The idea is that the geometry and uniformity of the cosmos were established during an intense early growth spurt. But some of the theory’s creators, including the author, are having second thoughts. As the original theory has developed, cracks have appeared in its logical foundations.

Highly improbable conditions are required to start inflation. Worse, inflation goes on eternally, producing infinitely many outcomes, so the theory makes no firm observational predictions. Scientists debate among (and within) themselves whether these troubles are teething pains or signs of a deeper rot. Various proposals are circulating for ways to fix inflation or replace it."

The original big bang theory was unable to account for the observed uniformity and geometric flatness of the universe, features that seemed to require highly unlikely intial conditions. To solve these problems, inflation was invented. The idea was that, at very high temperatures, gravity might become repulsive rather than attractive. This would cause a brief period of very rapid expansion (or inflation), at speeds much greater than the speed of light. Inflation made big bang cosmology more plausible.

Inflation was an ad hoc secondary theory devised solely to save big bang cosmology. It included a number of speculative assumptions about unobserved particles called inflatons, repulsive gravity, huge expansion speeds...merely to explain a finely-tuned big bang. Observational evidence for these assumptions has not been forthcoming. On the contrary, it is now becoming apparent that inflation has its own problems. Not least, the initial conditions needed for the right kind of inflation are even more improbable than those needed for a uniform universe.

The demise of inflation is typical of what can happen in cosmology. In studying the entire cosmos one has to infer universal features from a limited set of observations. Moreover, no laboratory can reproduce the high temperatures and pressures thought to exist close to the alleged big bang singularity. Hence many cosmological assumptions are inherently unverifiable.

2. Does Dark Matter Exist?
Saving big bang cosmology from being falsified has required the invention of not only inflation, but also other exotic concepts such as dark matter and dark energy. Also for these there is currently no observational evidence for any detailed proposal.

Take dark matter, for example. This is supposed to make up 83% of the mass of the universe but it cannot consist of normal matter. The main candidate for dark matter are Weakly Interacting Massive Particles, or WIMPs. Such particles are thought to form an enormous cloud surrounding the Milky Way. But WIMPs are expected to interact with normal matter only very rarely. A recent experiment to detect WIMPs has just reported (April 14, 2011) a negative result. Theoreticians will either have to come up with even more exotic proposals...or develop an alternative cosmological model.

3. Galaxy Formation Problems
A third recent cosmological setback concerns galaxy formation theories. A mature galaxy detected through gravitational lensing was recently (April 12, 2011) announced by the Hubble Telescope team. An estimated redshift of 6.027 dates it, in the conventional big bang chronology, to only 950 million years after the big bang. This is unexpected early for a mature galaxy.

Johan Richard, the lead author, says:
“We have discovered a distant galaxy that began forming stars just 200 million years after the Big Bang. This challenges theories of how soon galaxies formed and evolved in the first years of the Universe.... This suggests that the first galaxies have been around for a lot longer than previously thought.”

There are more problems with galaxies. Galaxies are thought to develop by the gravitational attraction between and merger of smaller ‘sub-galaxies’, a process that according to standard cosmological ideas should be ongoing. However, new data (April 18, 2011) from a team of scientists from Liverpool John Moores University directly challenges this idea, suggesting that the growth of some of the most massive objects stopped 7 billion years ago when the Universe was half its present age. Team member Clarie Burke commented,

“The lack of growth of the most massive galaxies is a major challenge to current models of the formation and evolution of large scale structure in the Univererse. Our work suggests that cosmologists appear to lack some of the crucial ingredients they need to understand how galaxies evolved from the distant past to the present day.”

4. Was the Big Bang the Beginning?
As an alternative to inflationary cosmology Paul Steinhardt (see above) proposes a cyclic cosmology. According to this theory, the big bang is not the beginning of space and time but rather a "bounce" from a preceding phase of contraction. The theory is cyclic because, after a trillion years, the expansion devolves into contraction and a new bounce to expansion again. The key point is that the smoothing of the universe occurs before the bang, during the period of contraction. Although the cyclic theory overcomes the problems associated with inflation, it is relatively new and may well have its own problems. However, it illustrates that there are many conceivable cosmological alternatives.

The possibility of a cyclic cosmology should caution those Christian apologists (such as William Craig) who use big bang cosmology as proof that the universe--along with space and time--started a finite time ago. Although the Bible certainly teaches such creation, the scientific evidence is ambiguous and cosmological theories are too speculative for dogmatic reliance.

In sum, the past week has given us more pointers that big bang cosmology, held by many as proven fact, is beset with difficulties and uncertainties.

Thanks for this report and assessment. What is your take on the model of origins promoted by YECers like Humphreys and Hartnett?

The cosmological models of Humphreys and Hartnett involve special conditions during creation that cause massive time dilation near the earth, so that earth clocks measured only a few days during billions of years of cosmic time.

Such models have various theoretical difficulties to overcome (e.g., getting sufficient time dilation at the earth, getting the observed red shifts, etc.). Also, the special conditions (e.g., sudden acceleration and, later, sudden deceleration) seem to require supernatural effects. Further, it is hard to get time dilation only near the earth; plausible models seem to include a larger region including at least local stars and, likely, our local Galaxy.

If supernatural effects are needed anyway, one might simply postulate a supernatural time-dilation bubble around the earth during creation week. An even simpler conjecture is that the rotation period of the earth was billions of years before the Sun was created on Day 4 (one problem with this is how to preserve the vegetation created on Day 3).

Or, since these models already involve the mature creation of the Sun and local stars, one could as well postulate that the entire astronomical universe was created in mature form.

From what I understand, but I am by no means an expert, don't cyclic models of the universe suffer major problems with the Second Law of Thermodynamics?

Jordan, yes, although I read an article in Scientific American [gag] proposing the theory that the Big Bang somehow "resets" entropy.

There are philosophical difficulties with a cyclic universe as well. William Lane Craig invokes those problems on a regular basis when dealing with someone who either rejects or is agnostic about a point of creation.

Thanks for your comments. Yes, thermodynamic considerations seem to put some constraints on cyclic models. Steinhardt’s cyclic model can satisfy these but at the expense of rather sophisticated, unverified concepts such as vibrating M-branes in higher dimensional space. The more recent Baum-Frampton (2007) cyclic model uses a hypothetical phantom energy. See, for example, http://en.wikipedia.org/wiki/Cyclic_model.

Of course, a theist could conjecture that God simply resets the entropy at each cycle. After all, the assumption that thermodynamic laws hold from one cycle to the next is itself just another conjecture.

The simplest eternal universe, due to George Gamow (1954), postulates that the present expansion was preceded by an eternal contraction. Thus, if the universe is open (i.e., if the present expansion continues forever) then there is only one (everlasting) cycle, which avoids any thermodynamic problems.

This is wonderfully interesting Dr. Byl, if for no other reason than that when engaging in interaction with educated people who reject the Bible en toto, I'm frequently told that all these problems (i.e. cosmic inflation, dark matter, etc.) have already been solved and the solutions are commonly agreed upon by "anyone who knows anything about this".

I'm not an astrophysicist, but I have studied enough history to know that phrenology was taught for decades at Harvard's medical school...and phrenology was highly regarded for a short period by "anyone who knows anything about this" (at least that was declared by the thousands of practicing phrenologists in the United States at the turn of the 19th century).

I'm wondering how long it will be until information like this successfully sows seeds of humility in the field of scientism?

Yes. See my comment above, where I briefly mention Hartnett's model. This model does have some very interesting implications, and avoids the need for dark matter and dark energy. However, it does draw upon a novel 5-d extension of general relativity, which may be a tough sell.

To get accurate information on my model see johnhartnett.org
As to the supposed problems in second paragraph above, they are only imagined by John Byl. They are not real, else please demonstrate your claim.

Thanks for your comment. I try to be accurate and fair.

Your book has God creating the galaxies on Day 4, then God (presumably supernaturally) stretches space (p.103), and supernaturally stops the expansion (p.116). You note that an observer on earth during the expansion would have seen large blue shifts (p.117). Also, your book provides no plausible explanation, or detailed calculation, as to why extreme time dilation occurs only near the earth and not at nearby stars, or the rest of our Galaxy. A further difficulty with your approach is that it is based on Carmeli's extension of general relativity, which is not widely accepted.

Your site johnhartnett.org does not seem to provide any more recent elaboration on these points. If you have addressed these points elsewhere, please direct me to the article.

I certainly support the construction of viable creationist cosmologies. Thus I do encourage you to develop and improve your model.