I have just returned from West Timor, Indonesia, where I taught a short course on “Science and Christianity” at the Indonesian Reformed Theological College, near Kupang.

I lectured for five mornings. The lectures were attended by about about 40-50 students, teachers and pastors. An additional, lecture, entitled “Is Genesis a Puzzle?”, attracted about 100 people. Rev. Edwar Dethan served ably as moderator and translator. The audience was very friendly, enthusiastic, and had a great sense of humour. Many interesting questions were raised. Some of the attendees were well read on the topic, being familiar even with works of Cornelius van Til and Gordon Clark. It seems that the audience had experienced that scientists were generally atheists; they were not used to meeting a Bible-believing scientist. 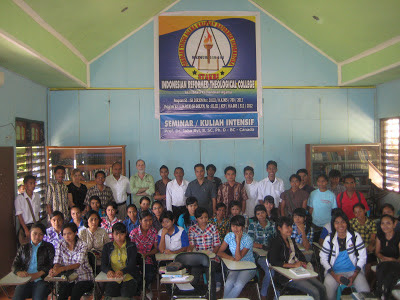 The theological college trains pastors for the Gereja Gereja Reformasi Calvinis (GGRC, or Reformed Calvinist Churches). It also trains teachers to teach religion in public schools. The instructors and students are all native Indonesians. The GGRC currently has about 6-7 churches in West Timor. Rev. Edwar Dethan, although a native of Timor, completed his theological training in Hamilton, Canada, and serves as a missionary for the Canadian Reformed church of Smithville, Ont.

It was good to experience the communion of saints with fellow believers in Timor. The church services, although in Indonesian, were very similar to those in Canada; Genevan psalms were heartily sung.

Unlike Bali, Timor is well off the usual tourist path; Europeans are rare here. Scooter are common, and I spent much time traveling on the back of one. The main food in Indonesia is rice; nasi goreng is very tasty. At night, away from city lights, the stars are very bright. I enjoyed observing the Southern Cross, clearly embedded in the Milky Way. 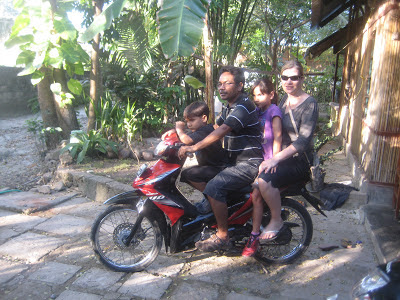 Walking past a primitive dwelling, with thatched roof and dirt floor, I was surprised to see two men sitting outside playing chess. It seems that Indonesians are avid chess players, and are keen to play foreigners. I played dozens of games of chess during my stay in West Timor.

I had a great time in West Timor. It was a very interesting experience.  I much appreciated the hospitality of Rev. Dethan and his wife Femmy. It was particularly enjoyable to meet fellow Christians, and to see how the Lord is at work throughout the world. May the Lord continue to bless the preaching of the gospel in West Timor and, indeed, worldwide.

Heartwarming to read about God's faithfulness - thanks dr Byl!