[This article appeared earlier in Una Sancta (Feb.8, 2014), a magazine of the Free Reformed Churches of Australia (FRCA). Dr Anderson, a pastor in the FRCA, gives another useful analysis of the Hermeneutics Conference in Hamilton. He has permitted me to post it here].

On behalf of you, that is, the FRCA, Rev. de Boer and I were recently packed up and shipped off to Canada for a short week to attend a conference in the snow and ice of Hamilton, Ontario. Yours truly was even invited to be one of the formal respondents, although this role was fairly marginal. Bleary eyed, fighting off sleep Rev. de Boer and I bravely entered the halls of academia as our bodies struggled to cope with the 50 degree difference in temperature compared to Aussie.

What was it all about and why was it so important for the two of us to be there? Well, you see, Australia is not the only federation of churches which is highly concerned with developments in the churches in Holland. The Canadians are equally concerned. And this is why the Theological Seminary in Hamilton organised a conference together with the Theological University in Kampen on hermeneutics (see title above for pronunciation), that is to say, interpreting the Bible, or as Paul put it: correctly handling the word of truth (2 Tim. 2:15). 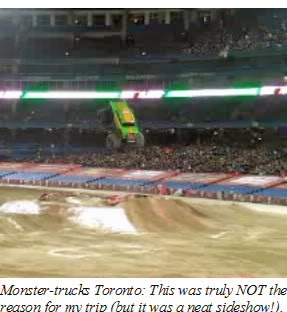 Let me say at the outset that it was a good conference in the sense that there was good fellowship and a brotherly atmosphere despite the fact that there were certain topics where the views were diametrically opposed to each other. This was, perhaps, most obvious in two lectures, one on women in office and the other on the question: What if Scripture and Science seem to say different things? - the prime example being Genesis one.

Genesis 1
Surprisingly for the Dutch, it was Genesis one that attracted the most tension. This, it was explained to them, is “because no-one in North America is remotely interested in women in office”. But how to read Genesis one is a hot issue in our sister churches in Canada.

Prof. Van Vliet of Hamilton argued for the primacy of Scripture and gave a good defence for reading the word “day” in Genesis one to mean a regular normal day. In the resulting discussion, what took people by surprise was the fact that while a Dutch professor completely agreed with this interpretation of the word “day”, he nevertheless argued that because Genesis one shows a high decree of structure and ordering, it therefore cannot be read as history, but as a framework with a more simple message, such as God is the one who created the world.

Now to my mind this kind of reasoning forgets at least two things:
1) If God is powerful enough to create the world, then he is also powerful enough to do that in a deliberate and ordered way. The presupposition behind the Dutch statement is that if a record of events is highly ordered, then it shows that there is a message in the ordering and that the ordering cannot be historical because (another presupposition) history just doesn’t happen in a logical ordered way. Newsflash: God creates his own history. Is He not the Lord of history?

2) If Genesis one betrays a lack of history because of its ordering, was God not pulling the wool over his people’s eyes? Could the Israelites really have been expected not to believe that God really created the world in six days, when that’s exactly what Genesis one says? After all, Genesis is not a book of poetry. Genesis one is not one of the psalms. It is part of a book purporting to describe the history from creation up until Jacob’s sojourn in Egypt. In other words, I do not find “this kind of reasoning” (= “twaddle” in Aussie lingo) to be at all persuasive.

Women In Office
While the argumentation for women in office presented by prof. Van Houwelingen of Kampen did not engender much tension, this presentation was in my view the most important. Essentially it was a carbon copy of the argumentation presented in the committee report to the Dutch synod. To be quite clear: it argues for women in all the offices of the church. That prof. Van Houwelingen’s presentation was the same as the report ought not to surprise us, given that he himself is on the committee responsible for the report. It kind of looks like he may have written it. Be that as it may, he surely stands 100 % behind its argumentation and therein lies the problem.

Paul in 1 Timothy 2:11-15 states that women ought to be silent in the church and provides two reasons, a) the creation order implying headship, and b) the fact that the woman was deceived in Eden. Now Van Houwelingen argues that we must go deeper than the arguments which Paul used (arguments which he finds weak anyway) and dig into his real purpose. And here is the rub. Supposedly Paul had a real purpose behind his command which more truly motivated what he was saying than the two arguments which he saw fit to write down. Paul, you see, was aiming at rest and peace. To make a long story short, Paul’s quest for peace in the church in his concrete historical context led him to command women to be silent. Whatever arguments suited that purpose were used. Quote: “Paul was flexible in his thinking” (translation: “Paul uses any old argument which he thinks might persuade you”). But what would Paul say in our society? In our historical context the church, according to Van Houwelingen, promotes unrest when it goes against the accepted equality of men and women in society. To truly achieve Paul’s purpose of peace and not put stumbling blocks in the way of the Gospel, we need to accept women in office.

For those who wish to smother themselves in this kind of – excuse my French - “nonsense” (original word deleted by editor) in a totally non-biased way, a translation of the Dutch report can be downloaded from:
http://www.synode.gkv.nl/english-materials/

I should say that I know prof. Van Houwelingen and respect him as an upright, honest man who desires to lead a life of faith in Christ. For this reason I cannot understand how he has bought into this line of reasoning. Using the same method one could argue for almost anything. I gave this example at the conference: Let’s say we agree that Paul truly wants to get all believers to live by God’s grace. 2000 years ago, with all those Christian Judaisers running around trying to get believers to be circumcised and keep obeying all the ritual laws of Moses, the best way to accomplish life by God’s grace was to argue for justification by faith. This could easily be used to get rid of any idea of justifying oneself by works of the (Mosaic) law. But now, 2000 years later, this very justification by faith gets in the way living by grace. It has created animosity between Christians (protestants vs Roman catholics etc). It is not understood by our secular society and in fact forms a stumbling block in getting to know God, because people are repelled at the idea that someone would sacrifice their own son to take away another’s punishment. Therefore in our historical context we should be spreading the Gospel of God’s grace by getting people to embrace life freely and existentially as given by God.

Hopefully, if I really did mean that, my consistory would have me suspended and deposed before you could run my car to the 60ft line (well under 2 seconds, by the way). But I believe that it shows the extreme danger of this way of reasoning. Such a method of interpretation – whatever the issue – ought not to be adopted or tolerated in Christ’s church. For this reason we ought to hope and pray that the Dutch synod addresses this issue of hermeneutical method and requires sanctions. The honour of the word of our Lord is at stake.

The Metaphorical Nature of Scripture
There was a third lecture which provided some discussion mixed with concern. It was the lecture of the dogmatics professor in Kampen, prof. Kamphuis. Without reproducing a whole lecture here, of concern was prof. Kamphuis’s emphasis on the metaphorical nature of Scripture. God, of course, as a much Higher Being than we, does indeed accommodate Himself to us when he communicates. And often God uses direct metaphors, such as when he speaks of Himself having arms, or a red-hot nose (that last one often disappears in translation – if you like metaphors, then learn Hebrew). God can also describe Himself as a ‛rock’. But, says Kamphuis, there is also a sense in which everything which God says to us is metaphorical. Even the seemingly simple statement: “Jesus Christ came to save sinners”. When Kamphuis was challenged as to what is metaphorical about the word “came”, he replied that Jesus did more than come, He as God took upon Himself our flesh. Even the word “save” is metaphorical as it means so much more than being “saved” from slavery in Egypt, for example, or being “saved” from drowning.

I hope that you, my reader, can see that Kamphuis remained quite orthodox in all his explanations. Why the concern then? The insistence that all God’s communication with us is in some sense metaphor muddies the waters. It suggests that God is unclear. But more importantly, it suggests that we ought to be able to falsify what is said in Scripture. Let me explain. Strictly speaking when you use a metaphor, you are using a figure of speech in which a word or phrase is applied to an object or action to which it is not literally applicable. So in the phrase “God is a rock” the word “rock” is a metaphor and we can falsify the statement by saying “God is not really a rock” (He exhibits the qualities of a rock). But can we really falsify a statement like “Jesus Christ came to save sinners”? Can we say, for example, that “Jesus did not really come”? Can we say: “Jesus did not really save”? Of course not. Kamphuis, it seems to me, would not say this either. But what about his students …? This is not a clear way of speaking about God’s communication to us, nor does it really reflect what we confess in art. 7 of the Belgic Confession.

Now you ought not to think that all the lectures at the conference were cause for concern. There were many positively thought provoking lectures as well, such as prof. Smith of Hamilton on the order of the material in the book of Jeremiah, or Dr. Van Bekkum of Kampen on 1 Kings 13 to name but two. Nevertheless, the point of the conference – as I understood it – was for an academic dialogue on ways of interpreting Scripture between Hamilton and Kampen and this dialogue was needed precisely because of the concern which has developed in both Canada and Australia at the direction the Dutch churches are taking. In this respect our concerns were confirmed and clarified. In that sense the conference achieved a good and clarifying purpose. Let us continue to pray for our brothers and sisters in the Netherlands, who indeed are at a crossroads in terms of church-life.
*****