The Absurdity of a Solid Dome

According to many Bible scholars, people of the Ancient Near East (ANE) believed that the sky was a fixed solid dome - in which the Sun, moon, and stars were embedded - supported by pillars, or mountains, at the ends of a flat earth. The Israelites are said to have shared this erroneous ANE cosmology, which is allegedly the underlying idea behind the "firmament" or “expanse” (raqia) of Genesis 1. 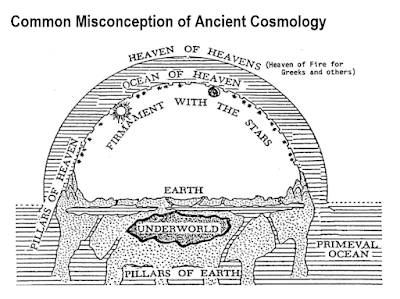 (From N. F. Gier, God, Reason, and the Evangelicals, University Press of America, 1987)
Not a Fixed Dome but a Rotating Sphere

Were ANE people in general, and the Israelites in particular, really so dense as to believe in a literal solid dome, as pictured above?

Ancient man may have lacked modern technology, such as telescopes and computers, and sophisticated mathematical theories. But he wasn't blind or stupid.

What about the stars? At first glance, the stars may seem to be fixed on a dome. Yet, anyone (try it yourself!) watching the stars for a few hours sees them moving through the sky, much like the Sun and Moon. So also the stars are clearly not attached to a stationary dome.

Moreover, the stellar motions clearly have a pronounced pattern. Here is a photo (a time exposure of a few hours) showing star-trails as seen in Fayyum, Egypt (latitude 29.3 degrees North). 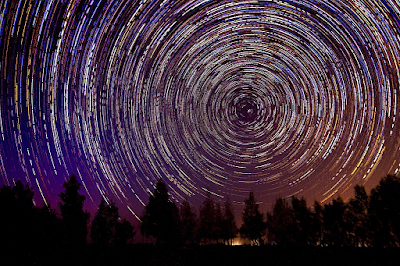 The stars near the star Polaris (above the Earth's North pole) travel in complete circles; stars further away rise in the East and set in the West, so that different stars are visible at different times of the night.

In short, the revolving stars seem to be fixed, not to a stationary dome (a semi-sphere), but to a rotating sphere, called the celestial sphere. The celestial sphere surrounds the earth and is not supported by it (see figure). 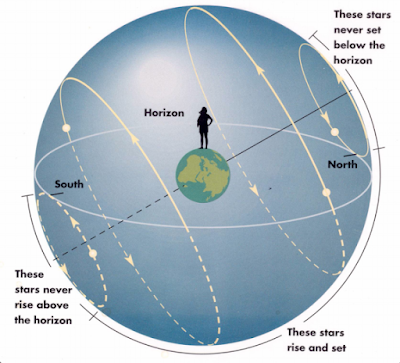 Although the stars seemed to be fixed to the celestial sphere, it is easily seen that the Moon moves along this sphere roughly once a month, and the Sun once a year, marking off months, seasons, and years (Gen.1:15).

The ancients, keener observers of the night sky than modern ANE scholars, were well aware of such celestial motions. Indeed, the ancient Egyptians marked the beginning of their year by the first dawn appearance of Sirius, the brightest star in the sky.

In line with such simple observational considerations, ANE scholar Margaret Huxley, upon close examination of numerous cuneiform sources, concludes that ancient Mesopotamians thought the sky to be a rotating sphere with a polar axis, rather than a  stationary vault.[Huxley, Margaret. “The Shape of the Cosmos According to Cuneiform Sources.” Journal of the Royal Asiatic Society, vol. 7, no. 2, 1997, pp. 189–198. JSTOR, www.jstor.org/stable/25183348. Accessed 17 June 2021.]

The Myth of the Solid Dome

If the solid dome is so contrary to common sense and has no historical basis, how did it come to dominate biblical scholarship?

That tale is related by Randall W. Younker and Richard M. Davidson ["The Myth of The Solid Heavenly Dome: Another Look at The Hebrew." Andrews University Seminary Studies (AUSS) 49.1: 125-147 (2011)]. They find that the idea that the ancient Israelites believed in a solid vault resting on a flat earth emerged during the early 1800s, primarily through the American writer Washington Irving (1783-1859). He propagated the myth that most ancient and medieval people believed in a flat earth, until the time of Columbus. [For a detailed account of the flat earth myth, see Jeffrey Burton Russell, Inventing the Flat Earth: Columbus and the Historians (Westport, Conn.: Praeger, 1991)].

Younker and Davidson conclude that, in fact, the majority of early Christian and medieval scholars

“believed in a spherical earth, surrounded by celestial spheres that conveyed the sun, moon, stars, and planets in their orbits around the earth. Moreover, the concept of a heavenly vault does not appear in any ancient Babylonian astronomical documents. Rather, this notion was erroneously introduced into the scholarly literature through a mistranslation (1890) of the Enuma Elish by Peter Jensen."

In sum, there is no basis for the notion that ANE people, including the Israelites, believed that the sky was a solid dome.

Rather than reading presumed ancient cosmology into Genesis, we should simply read it on its own terms. Doing so, we see that the raqia of Genesis 1, called heaven (Gen.1:8), is clearly not solid: birds fly in it (Gen.1:20, cf. Deut.4:17), and the sun, moon, and stars move through it (Gen.1:14-18). In fact, the raqia is simply the sky, including the atmosphere and outer space.