Here is a famous cartoon by Ken Ham 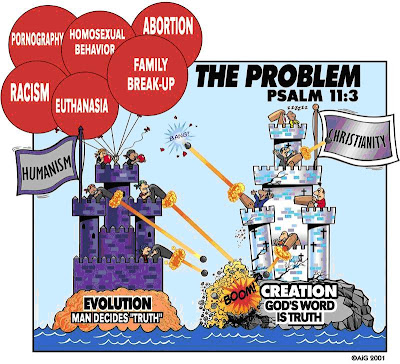 Ken Ham writes:
Look closely at how this battle is portrayed. The humanists are seen as very clever. They have aimed their guns at the foundations of Christianity. They have attacked the authority of the Word of God. There is no doubt that they’ve been successful in undermining the Word of God in our Western culture. But how have they done this? They have directly attacked the foundational book of the Bible—Genesis....
Look at the castle diagram again and notice how the Christians usually fight the battle. They don’t really understand that their foundation is being shot out from under them. They know there’s a problem. Yes, they see the social ills and they’re concerned about the increasing problems of abortion, pornography, homosexual behavior and all the other evils. But they don’t realize that the change has occurred foundationally. Thus, they aim their guns at each other—or fire into nowhere—or shoot at their own foundation (when they believe in evolution and/or millions of years), or merely shoot at the issues.
This is a major problem in Christendom. Too many people concentrate solely on fighting the issues, when the issues are not the problem. They are simply the symptoms of the real problem.
I think that Ken Ham is quite correct in identifying the central issue as one of epistemology--the question of ultimate truth. He is also correct in assessing that most Christians do not really understand what is going on. By compromising with humanism many Christians destroy their own foundations.

Thanks for the link. Ken Ham is spot on.

So Scripture is a reliable moral guide?

If that's so, why do we not do the following:
a) mandate that a woman marry her rapist (so long as he pays her father)(Deuteronomy 22:28-29)
b) think it morally permissible for men to beat their slaves (so long as its not to the point of death) (Exodus 21:20-21)
c) applaud the faith of those who would be willing to murder their children if they believed God commanded it (Genesis 22:1-24)
d) think it morally permissible for our soldiers to kidnap foreign women and take them as wives against their will as God demanded His people do with the Midianites (Numbers 31:7-18)

This is the morality of the Bible, like it or not.

Thanks for your comments. A few points in response:

1. The particular cases you cite should be read in their larger biblical context.

3. This, in turn is grounded in the command to "love the Lord your God with all your heart, soul, strength, and mind, and your neighbour as yourself" (Luke 10:27).

4. In the absence of absolute truth, such as is revealed in the Bible, how would you ground morality? This seems to be a great philosophical problem. See, for example, my post "Philosophers in Athens"