Biblical chronology has fallen upon hard times. Until recently, almost all Christians believed that the genealogies of Gen.5 & 11 indicated that Abraham lived only a few thousand years after Adam. This consensus was challenged, in the late 19th century, by William Henry Green who argued that these genealogies contained gaps. Since then, most Biblical scholars have adopted Green's view that the Bible gives no chronological information prior to Abraham. Jeremy Sexton has disputed Green's thesis in an article, "Who was born when Enosh was 90? A semantic reevaluation of William Henry Green's chronological gaps" (Westminster Theological Journal 77 [2015]:193-218).

The Genesis genealogies certainly give a strong initial impression that they are of a chronological nature. Consider: "when Adam had lived 130 years he fathered Seth...when Seth had lived 105 years he fathered Enosh..." (Gen.5). Adding up the ages of fathering, we find that 1656 years elapsed from the creation of Adam to the Flood (Gen.5), and a further 222 years to Terah (Gen.11).

We know that some biblical genealogies (e.g., Matt.1) are abbreviated by comparing these to other biblical genealogies. Moreover, "fathered" (begat) can sometimes refer to remote descendants. From this Green proposed that the Genesis genealogies were also abbreviated, so that "when Enosh had lived 90 years he begat Kenan" could be read "he begat (the son from whom sprang) Kenan". Green concluded that the Genesis genealogies were thus not intended to be used for chronological purposes.

Sexton, in his response to Green, notes that Green's argument has the following form:


Premise P1: Gen. 5 and 11 may contain genealogical gaps (e.g., B may sometimes be a remote ancestor of A)

Sexton grants P1, granting that "begat" may sometimes refer to descendants more distant than immediate sons. However, Sexton shows that P2 does not follow from P1, and is hard to defend. Indeed, he shows that, in the above example, Kenan is the object of  "begat", so that Kenan is the one begotten when Enosh was 90, regardless of whether Kenan was his son or grandson.

Hence, even were Gen.5 and 11 to contain genealogical gaps (P1), this does not entail any chronological gaps (P2). Sexton concludes:


"Many evangelicals treat Green's chronological gaps as a settled conclusion, but the crucial P2 remains unwarranted. Green conflated genealogical gaps with chronological gaps, and failed to provide a raison d' etre for the begetting ages...A computable chronology of the human race, going back to Adam on the sixth day of creation, is lexically and grammatically inescapable."


Textual Variants
There is, unfortunately, some uncertainty about the precise begetting ages given in our current Bibles. The Septuagint (a Greek translation of the Hebrew Old Testament, completed about 130 BC) has somewhat different ages. It yields 2262 years from Adam to the Flood, and a further 1002 years to Terah. Sexton argues that the Septuagint begetting ages were based on earlier Hebrew sources, and should thus be taken as original, particularly the ages in Gen.11. Assuming Abraham was born in 2166 BC, Sexton dates the Flood at 3298 BC, which entails the creation of Adam at 5560 BC.

Sexton has the following table: The Begetting Ages of Genesis 5 and 11
(MT = Hebrew Bible, LXX = Septuagint, SP = Samaritan Pentateuch, Josephus "Antiquities of the Jews" [about 90 AD]): 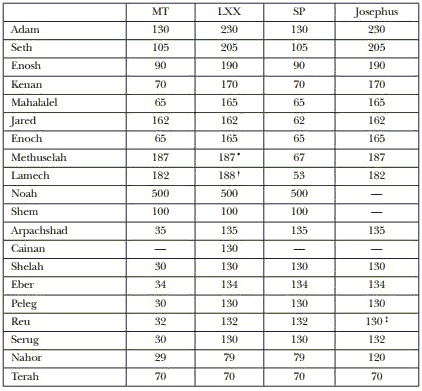 Green's proposal for genealogical gaps has been contested ever since it was first published. Recently James Jordan, in his Biblical Chronology series, and Jonathan Sarfati, The Genesis Account (2015), have both, like Sexton, argued for complete genealogies, although both, unlike Sexton, prefer the Hebrew figures to those of the Septuagint.

For further discussion on uncertainties due to textual variants and the like, see Chris Hardy & Robert Carter, "The Biblical minimum and maximum age of the earth". They find the limits for Creation to be somewhere between 5665 BC and 3822 BC, and the Flood between 3386 BC and 2256 BC.

Biblical Chronology and Science
The main problem, of course, that many Christians have with the traditional Biblical chronology is that it contradicts mainstream historical science. Indeed, Green acknowledged that his quest for gaps was motivated by scientific conclusions about the allegedly great antiquity of mankind.

Currently, Christians embracing mainstream chronology place Adam somewhere between 40,000 BC and 200,000 BC. That requires stretching the Genesis genealogies by a factor of 20 to 100, so that at least 95% of the links between Adam and Abraham are missing, which seems rather implausible.

If Sexton is right about the completeness of the Genesis chronology--and I believe he is--then one must conclude that mainstream historical science is wrong. So what? This is already entailed in our belief in the Biblical account of the creation and fall of Adam & Eve, which plainly contradicts the evolutionary view of mainstream science.

Let me note, in passing, that I am aware of only one recent Reformed study Bible that promotes the traditional Biblical chronology: The Reformation Heritage KJV Study Bible (2014), which has an excellent treatment of Gen.1-11.

It is noteworthy that Sexton's article was published in the Westminster Theological Journal, since this journal is run by the faculty of Westminster Seminary, none of whom--as far as I know--support the traditional Biblical chronology. Thus it will be interesting to see what reaction--if any--Sexton's article will provoke.

Update (June 1, 2017): An updated version of Sexton's article has been published by Jeremy Sexton and Henry B. Smith, Jr., "Primeval Chronology Restored: Revisiting the.Chronologies of Genesis 5 and 11", Bible and Spade, v.29, n.2, pp.42-49

I've been able to read some discussions between Jeremy Sexton and James Jordan online. Interesting stuff. Sexton's a big fan of the LXX chronology. Some of his arguments are certainly interesting, but ultimately, I find the theologically significant numbers emerging out of the Masoretic chronology hard to escape, especially given that the differences between the LXX and Masoretic in Genesis 5 and 11 are round numbers: differences of 100 or 50 years, for example. That makes molding in order to achieve a numerically round end (i.e. the rise of the Temple coming precisely 3000 years after the Creation) implausible. Josephus is an interesting case: the numbers he gives correspond to the LXX, but sometimes the sums he gives correspond to the Masoretic. Such traces of the Masoretic chronology may well reveal a slip on the part of a scribe who altered the text. Cascione has a fascinating treatment of the numerical features of Genesis 5 and 11 in "Repetition in the Bible."

At risk of arguing what fundamentally applies to every point in the debate between Christianity and the secular west:

"If Sexton is right about the completeness of the Genesis genealogies--and I believe he is--then one must conclude that mainstream historical science is wrong. So what? This is already entailed in our belief in the Biblical account of the creation and fall of Adam & Eve, which plainly contradicts the evolutionary view of mainstream science."

One had to grapple with the definition of science ('historical' intentionally omitted).

Science is reasonably defined as 'what can be demonstrated to be repeatable without the interference of actors outside the system'.

A little before my ancestors spoke much English, Louis Pasteur addressed the spontaneous generation of life by demonstrating that such life was already present in the substances in any given test tubes of the day. For one who would deny that substance, spontaneous generation is the only possible explanation; but M. Pasteur demonstrated that outside influence. For those who reject the demonstration: it is impossible to deny the conclusion that life is spontaneously generated if you deny that life was previously present.

On today's field of debate ... the same framework applies, and the same presuppopsitions.

If I have to explain the emergence of any designed object, without reference to the designer, by definition it will appear to be an un-designed object. 'Historical science' purports to describe what happened if there was no external influence. If by definition I exclude the action of a conscious creative agent, I will by definition look for the best explanation for how anything will arise by a conscious creative agent. However, my explanation will always by definition fail to find the mark, since there really is such an agent! The debate is about the presupposition, not about the conclusion.

Brothers who believe that God as he has revealed himself to us exists: don't try to reconcile his existence and action with any conclusions derived from presupposition that he doesn't exist!

Addressing the specific issue at hand, the text is clear: If X happened when I was 105, it's irrelevant whether X was that my grandson was born or my son was born; it's fantastic that one still hears an argument that it matters.

If LXX and the Vulgate got some years different than the Masoretic text ... while I can read Greek, Latin and Irish, how can one not lean toward the source language... in any case it's a rounding error.

One need not be nonplussed by pagan sources that aren't exactly in agreement.

Thomas: The supposed theological significance of numbers is not a basis on which to do textual criticism. -Jeremy Sexton

First, thanks for reading my paper and posting on it. I'm gratified by your comments. One minor correction in your original post. You wrote, "If Sexton is right about the completeness of the Genesis genealogies...." Of course, I don't argue for the completeness of the *genealogies*, only the *chronology*. I could tell from the rest of your post that you know this. Thanks again!

Thomas R: It's not a matter of leaning toward the source language v. not leaning toward the source language. The question is what the Hebrew originally said. And the LXX is by far our oldest witness to the Hebrew. The LXX attests to a very ancient Hebrew text with the longer chronology. During the nearly 600 years after the Pentateuch was translated into Greek (until Eusebius), the MT's shorter chronology only appears twice: in Jubilees (2nd century BC), which only contains a few numbers that match the MT's chronology, and Seder Olam Rabbah (2nd century AD), which is the first time a complete MT timeline shows up. Notably, *both of these ancient witnesses are corrupted Jewish chronologies in which history is engineered for ideological purposes* (that is not a disputed point). So there are no reliable witnesses during the 600 years after the translation of LXX Gen 5 and 11, and during that same period the LXX's chronology appears all over the place in reliable witnesses (Demetrius, Eupolemus, Luke 3:36, LAB, Josephus, SP Gen 11). It shows up in chronologies that were based on *Hebrew* texts and sources. It's pretty clear that the MT's chronology was invented in the 2nd century, and that it borrowed some ideas (including a few specific corrupted numbers) from the highly compromised Jubilees. The Hebrew behind LXX Gen 5 and 11 is anterior and superior to the Hebrew of MT Gen 5 and 11.

Thanks for your comments, which I just noticed today. I have made the correction you noted. I enjoyed your paper, which makes some excellent points, and I hope that it will provoke further discussion on this interesting issue.