Lectures in Zambia and South Africa

Last week I returned from Africa, where I gave a number of lectures.

The first stop was at the African Christian University, in Lusaka, Zambia. This is a young, still small, institution operating under the Reformed Baptist churches of Zambia.

On Sunday I attended services at two Reformed Baptist churches in Lusaka. Both were very large (each over 600 members), had solid Reformed sermons, and had members in influential positions in Government and state universities. It is interesting that these churches are entirely operated by native Zambians, whose pastors have been strongly influenced by the teaching of Martyn Lloyd-Jones; they hold to the London Confession of 1689. These churches have tremendous potential for providing a Reformed influence on Zambian culture. 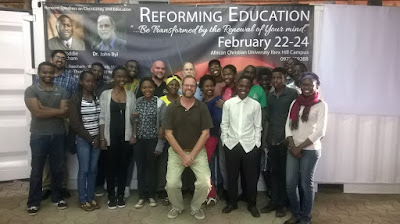 On Monday morning two ACU faculty members, Davey Hoffman and Prashant Thakkar, drove me down to Livingstone, where we viewed the spectacular Victoria Falls. Afterwards we parted, and I walked across the bridge to Zimbabwe. From there I worked my way to Kasane in Botswana, then to Walvis Bay in Namibia, from where I flew to Johannesburg.

At Jo'burg Airport I was picked up by Francois van Deventer, who brought me to Andries and Mandi Opperman, in Pretoria, where I stayed for the next few days. On Sunday I spoke on "Does Scientific Evidence Contradict the Bible?" at the Gereformeerde Kerk Wonderboompoort.

The next day I met with Rev. Jopie van der Linden, who works for the Reformational Study Centre. This organization helps pastors in developing countries by providing them with solid Reformed material for their ministry.

On Tuesday I was at AROS (Akademie Reformatoriese Opleiding en Studies), which aims to promote Reformed higher education in South Africa. There I gave three lectures: "Has Science Killed God?", "The Reformed Worldview and Origins", and "Teaching Math from a Christian Perspective."

The next stop was Potchefstroom, where my host was Dr. Johan van der Walt.. In 2003 I gave a series of lectures to the faculty at Potchefstroom University on Christian worldview thinking. Then it was still a Reformed institution. Since then it has been taken over by the state, and secularized, being renamed "North-West University". Here I gave three lectures: "Did Science Kill God? Naturalism versus Christianity", "A Christian View of Physics", and "Defending the Faith in Science and Theology". The latter was done jointly with Dr. James White, a well-known apologist who happened to be at Potchefstroom the same time as myself.

Finally, I spent the last few days to the home of Rev. Slabbert le Cornu, who organized the South Africa lectures. I spoke at his church after the Sunday morning service.

It was great to find that Africa, too, has people who are zealously promoting the Reformed faith, and who are establishing institutions of higher learning--such as ACU, AROS, and the Reformational Study Centre--to teach a Reformed worldview. May the Lord bless their ministry, and give that it may bear much fruit.

Very encouraging! Does there happen to be any video or audio available of your talks?